Delicate, small-sized drawings by the enigmatic Gugging artist Leopold Strobl, whose work was recently acquired by the MOMA in New York. 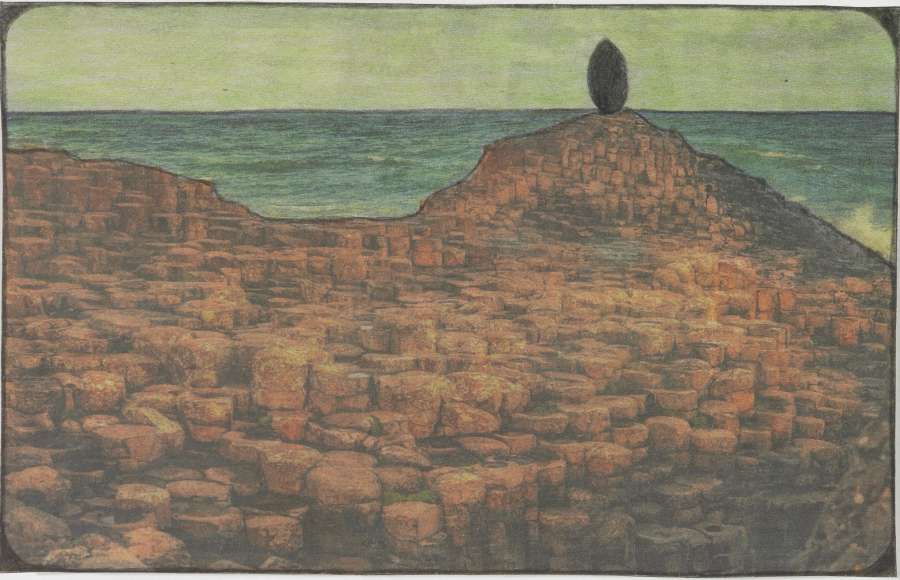 In 2017, while writing our book on collecting art, we visited the Gugging museum, gallery and ateliers. Being collectors of outsider art, amongst others, this institute (located in the proximity of Vienna) is a must visit. We have collected work by some Gugging artists over the years: Johann Korec, Karl Vondal, and our favorite, Leopold Strobl. Strobl's work was recently acquired by the MOMA in New York (they bought 5 works).

"The Maria Gugging Psychiatric Clinic, known as Gugging, is a psychiatric institution located on the outskirts of Vienna, Austria. Several of its patients became known for their Outsider Art, and were referred to as the Gugging Artists. Today, the artist/patients live in a dedicated art therapy center at Gugging, known as the Art / Brut Center Gugging. In stark contrast, Gugging has a darkened history during the time of the Nazi Regime, when hundreds of mental patients were murdered or abused as part of the Nazi Regime Euthanasia Program.

In the late 1950s, psychiatrist Leo Navratil (1921-2006), of the Maria Gugging Psychiatric Clinic, had his patients produce drawings for diagnostic purposes. The following year he discovered artistically talented individuals in his ward - a finding that was confirmed by Jean Dubuffet, the French artist who coined the term Art Brut (also known as Outsider Art). Navratil's first book Schizophrenie und Kunst (Schizophrenia and Art) was published in 1965. Attracted to the clinic by this work, many Viennese artists visited Gugging. In 1970 the first exhibition of the "Gugging Artists" took place in a Vienna gallery. Thereafter, the "Gugging Artists" were frequently presented in galleries and museums.

The "Center for Art and Psychotherapy" was founded by Navratil in 1981. He invited artistically talented patients to live in the house, which serves as living space, studio, gallery and meeting place. With the founder's retirement in 1986, Johann Feilacher became his successor. Feilacher stressed the role that art played at Gugging and went on to change its name to the "House of Artists" (German: Haus der KÃ¼nstler). Within Europe, the House of Artists is regarded as a model for psychiatric reforms based on art therapy as a means to reintegrate clients into society.

Presently, a cultural center is located next to the House of Artists. It is known as the "Art / Brut Center", and consists of a museum, a gallery and a public studio. The museum contains the works of the Gugging artists, and also hosts traveling Art Brut exhibitions, which include artists such as Martin Ramirez and Adolf WÃ¶lfli. The museum building also hosts a public studio that is open to all, but is mainly used by individuals who have undergone or are receiving psychiatric treatment. Together the museum, the gallery, the "House of Artists" and the public studio, are known as the Art / Brut Center Gugging.

In early 1994 David Bowie and Brian Eno visited the Gugging psychiatric hospital to interview and photograph the celebrated artist-patients famous for their "Outsider Art". Artistic materials favored by the Gugging's residents had a powerful influence on production strategies in the studio during the Bowie / Eno collaboration. In March 1994 a three-hour piece (mostly dialog) further inspired the process of the 1995 concept album Outside."

Leopold Strobl was born in Mistelbach, Lower Austria. He has devoted himself exclusively to art for more than 35 years, and has been a guest of the Open Studio program at the Gugging House of Artists in Vienna for more than a decade. He draws in the morning and single-mindedly finishes a new piece per session. This aspect of his routine relates directly to his chosen format (most works are approximately 4.2 x 3.9 in.). Strobl always renders his drawingsâ€”or the component parts of his paper collagesâ€”on carefully selected newsprint clips, which he then adheres onto clean drawing paper. He signs the back of every finished work with a personal symbol, notes the technical specifications, andâ€”remarkablyâ€”records how long it took him to complete it.

The underlying use of published media furnishes Stroblâ€™s works with different pictorial facets and layers of meaning. Under his hand (and an intuitive grasp of light effects and the interaction between solid colors and transparencies) a few of the printed motifs emerge while others are obscured under the more abstract execution of the whole. Perhaps the signature formal feature of Stroblâ€™s work is his incorporation of bold dark masses that create overpowering negative spaces of sorts. These dark areas, which the artist outlines and colors before everything else, are sometimes an integral part of the landscape. Other times, they seem to be mercurial matter that could be handled like dough. In the human-less setting of Stroblâ€™s vision, these abstract volumesâ€”which occasionally emulate basic humanoid forms and gesturesâ€”are arguably the nonfigurative, malleable main characters. Furthermore, they drive Stroblâ€™s virtuosic awareness of perspective and framing. We only see what we are allowed of these landscapes because the artist places us at specific points of view that we must come to terms with. This negation of omniscience, which expresses a very postmodern sense of relativity, constantly reminds us of the partial nature of every story.

*Based on the press release for the exhibition â€œSmallscapesâ€ (2016) by Alejandra Russi.