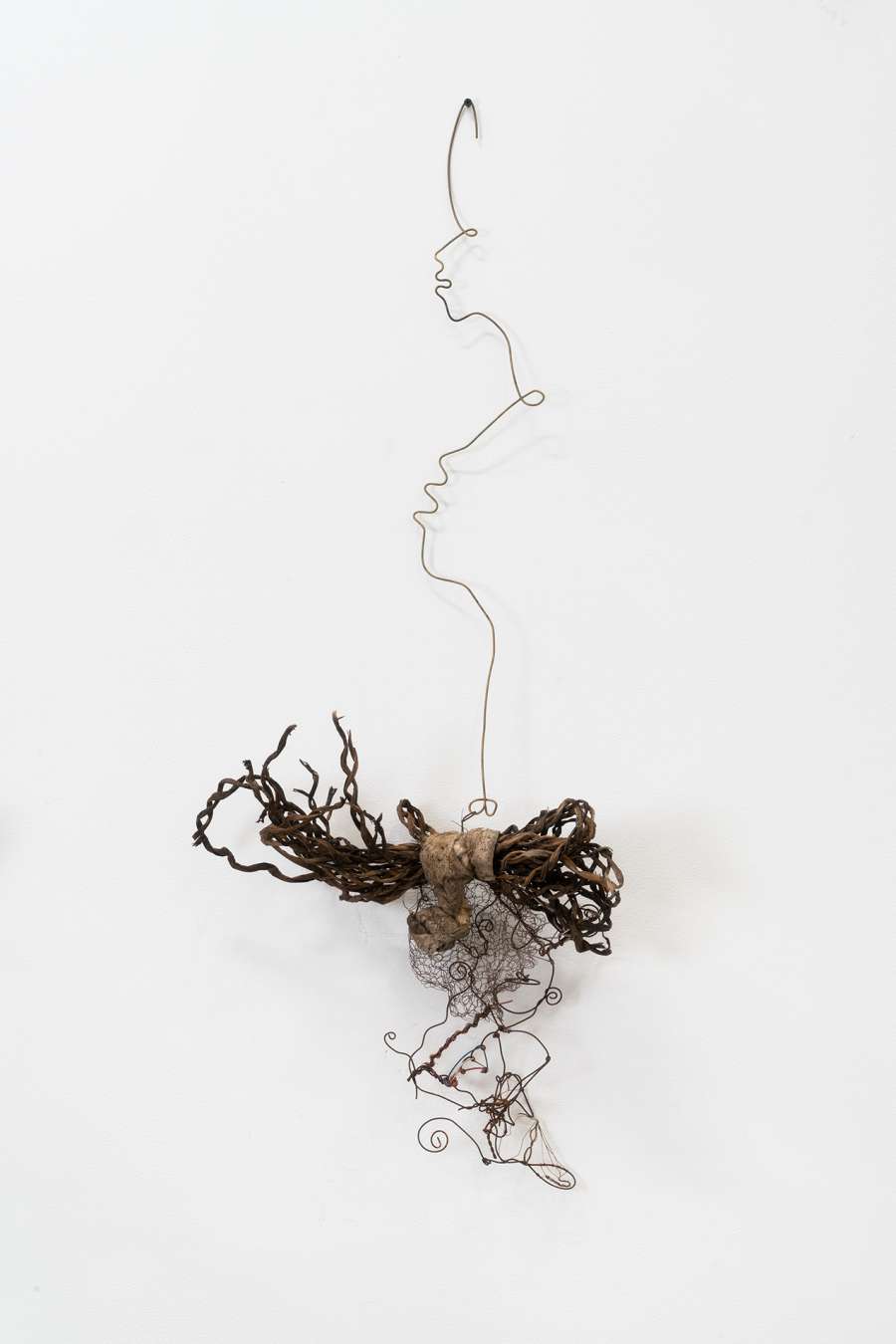 We love Lonnie Holley's work: his assemblages, his sculptures carved out of sandstone, his drawings. At James Fuentes Gallery we purchased this vintage Lonnie Holley piece: Like an Old Net (2013-2017).

January 28 - May 13: Outliers and American Vanguard Art curated by Lynne Cooke at The National Gallery of Art, Washington DC.

May 22 - September 23: History Refused to Die: Highlights from the Souls Grown Deep Foundation at the Metropolitan Museum of Art, New York.

Lonnie Holley was born on February 10, 1950 in Birmingham, Alabama. From the age of five, Holley worked various jobs: picking up trash at a drive-in movie theatre, washing dishes, and cooking. He lived in a whiskey house, on the state fairgrounds, and in several foster homes. His early life was chaotic and Holley was never afforded the pleasure of a real childhood.

Since 1979, Holley has devoted his life to the practice of improvisational creativity. His art and music, born out of struggle, hardship, but perhaps more importantly, out of furious curiosity and biological necessity, has manifested itself in drawing, painting, sculpture, photography, performance, and sound. Holleyâ€™s sculptures are constructed from found materials in the oldest tradition of African American sculpture. Objects, already imbued with cultural and artistic metaphor, are combined into narrative sculptures that commemorate places, people, and events. His work is now in collections of major museums throughout the country, on permanent display in the United Nations, and been displayed in the White House Rose Garden. In January of 2014, Holley completed a one-month artist-in-residence with the Robert Rauschenberg Foundation in Captiva Island, Florida, site of the acclaimed artistâ€™s studio.

Holley did not start making and performing music in a studio nor does his creative process mirror that of the typical musician. His music and lyrics are improvised on the spot and morph and evolve with every event, concert, and recording. In Holleyâ€™s original art environment, he would construct and deconstruct his visual works, repurposing their elements for new pieces. This often led to the transfer of individual narratives into the new work creating a cumulative composite image that has depth and purpose beyond its original singular meaning. The layers of sound in Holleyâ€™s music, likewise, are the result of decades of evolving experimentation.

Holleyâ€™s music caught the attention of Matt Arnett, whose father has been collecting Holleyâ€™s art since the 1980s. In 2006, Matt organized the first professional recordings of Holleyâ€™s music. In 2010, Arnett set up a performance by Holley at his home. One of the people in attendance was Lance Ledbetter, founder and owner of the record label Dust-to-Digital. Deeply moved by Holleyâ€™s keyboard playing and singing, Ledbetter signed Holley to his record label. Soon after, Holley found himself in the studio again, and in 2010 and 2011, more studio sessions ensued. The result was the album Just Before Music. More recordings continue to be made to celebrate and to document one of Americaâ€™s most compelling musicians. In early 2014, Holley recorded again with Richard Swift, acclaimed musician and producer at his studio, National Freedom, in Cottage Grove, Oregon.

In addition to the studio sessions, Holley began touring as a musician. In August and September of 2013, Holley toured the West Coast with Deerhunter. That tour was followed by a tour of the East Coast with Bill Callahan, and in November and December of 2013, Holley had his first tour through Western Europe (Spain, Portugal, Germany, Denmark, Belgium, The Netherlands, England, and France). Holley has been joined on stage or in the studio by a variety of musicians, including members of Deerhunter, Black Lips, The War on Drugs, Animal Collective, Dirty Projectors, Bon Iver, Julia Holter, Megafaun, as well as Ben Sollee, Steve Gunn, Jenny Hval, Marshall Ruffin, Daniel Lanois, Laraaji, Brian Blade, Alexis Taylor (Hot Chip), Bill Callahan, Dave Eggar, Laraaji, Kelly Pratt (Beirut/Arcade Fire/The Antlers), Sam Amidon, Aaron Embry (Elliot Smith/Edward Sharpe and the Magnetic Zeros) and others. In 2013, Holleyâ€™s first records were named to a number of Top Records of the Year lists, including The Washington Post (#4) and The Chicago Sun Times (#2).

In 2014, Holley continued to tour, completing another tour of Europe (Belgium, Norway, England, Denmark, the Netherlands, and France) and a USA/Canada tour with Daniel Lanois. Also in 2014, the Metropolitan Museum of Art announced that they had acquired three sculptures by the acclaimed artist and musician, through the generosity of the Souls Grown Deep Foundation.

Holley played a number of shows in 2015, touring Europe again to audiences in England, Germany, Switzerland, Belgium, France, and the Netherlands. That tour kicked off with a show at Queen Elizabeth Hall, as part of David Byrneâ€™s Meltdown Festival. In addition to his European tour, Holley played shows at the Brooklyn Academy of Music, The Hammer Museum in LA, The American Folk Art Museum, St. James Hall in Vancouver, The Charleston Music Hall, among many others, but the majority of the year was not spent performing live. In 2015, Holley recorded music for the film Five Nights in Maine, which premiered at the Toronto International Film Festival and saw theatrical release in the summer of 2016. An exhibition of his visual art opened in the summer of 2015, titled Something To Take My Place: The Art of Lonnie Holley, at the Halsey Institute of Contemporary Art, accompanied by a monograph of the same name. In the winter of 2015/16, Supported By the Power: Lonnie Holley, an exhibition of Holleyâ€™s sculptures opened at Duke Universityâ€™s John Hope Franklin Center.

Lonnie Holley continues to make art, record music, and tour occasionally, either alone or with collaborators. The songs and the shows are never the same, as Holley never performs the same song twice. In the summer of 2016, he embarked on a tour throughout the Southeastern United States, this time with a full band of frequent collaborators that included Ben Sollee, Stevie Nistor, Kelly Pratt, and Marshall Ruffin. On the tour, the band visited artists, art sites, and museums, and held workshops for adults and children along the way.

In late September, 2016, Holleyâ€™s music was sampled on the acclaimed third album (22, A Million) from Bon Iver. That same month, Holley was a featured visual artist at AfroPunk/Atlanta, where his found object sculptures were on display.

In November of 2016, Holley embarked on his fourth European tour, playing a number of festivals and music venues, culminating in a sold-out, two-night residency at the acclaimed CafÃ© Oto in London. He returned to the States in time for the premiere of the short documentary about Holley, The Man is the Music, at Doc NYC in New York.

Holley closed out 2016 with his final show of the year at Pioneer Works in Brooklyn, sharing the stage with Bon Iver.

2017 was also a busy year for the artist. In January, an exhibition of his art, Lonnie Holley: I Snuck Off the Slave Ship, opened at the Atlanta Contemporary Art Center. In May, an exhibition entitled Thumbs Up for the Mothership (a two-artist show with Dawn DeDeaux) premiered at MASS MoCA, coinciding with the opening of the new Building 6. His work was also featured in two exhibitions at the de Young Museum (The Fine Arts Museums of San Francisco) and had two solo exhibitions at James Fuentes Gallery, his New York gallery.

Additionally, he made wood block prints with Paulson Fontaine Press, collaborated on three etchings and a zine with artist Chris Johanson, played a number of concerts, spent a lot of time in the recording studio preparing for the release of his third album, due out in the spring of 2018.